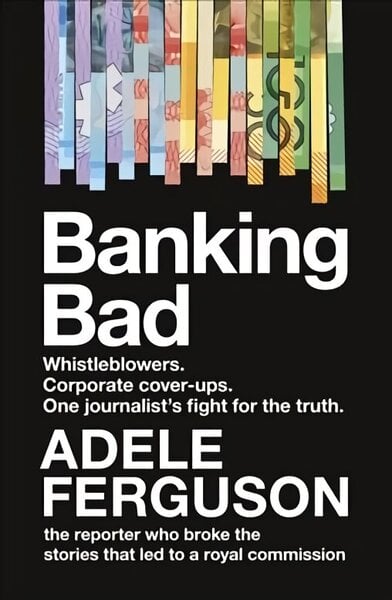 Winner of the 2020 Davitt Award for True Crime/Non-fiction.Against all the odds, Australia held a royal commission into the banking and financial services industries. Its revelations rocked the nation. Even defenders of the banks were blindsided. Few people were more instrumental in bringing about the commission than journalist Adele Ferguson. Through her exposes in print and on television, she pursued the truth about funds mismanagement, fraud, lack of probity, and the hard-sell culture that took over the finance industry after deregulation in the 1980s. But it wasn't just light-touch regulators and crooked bankers growing fat on bonuses she put under the spotlight. It was also their victims - men and women who had lost everything, and had no recourse when they discovered empty accounts, egregious fees, forged documents and broken promises.Now in Banking Bad, Ferguson tells the full story of the power imbalance, toxic culture and cover-ups. She describes the long fight for justice by whistleblowers, victims and political mavericks, and she looks at the outcomes of the royal commission - the falls from grace, the damaging hubris, the scathing assessment of the regulators, and the colossal compensation bill - an estimated $10 billion.Finally, she asks whereto from here? In May 2019, the Coalition government, which resisted calls for a royal commission, was re-elected. Bank stocks surged and lending regulations were loosened. Will it all be business as usual from now on, or have our financial executives learned that their wealth cannot come at the expense of ordinary Australians?This is a book for every person with a bank account.PRAISE'If you want a glimpse of the reality distortion that multi-millionaire bankers live in, you need to read Banking Bad.' - Scott Pape'Ferguson's pacey writing style gives the book the air of a corporate thriller.' - Michael Rowland, ABC News Breakfast'And for those of who anticipate that corporate Australia will lapse back into the state of complacency and misconduct revealed in the APRA CBA Report and the Hayne Royal Commission, ... should read the whole book for themselves - for no other reason than that it so clearly identifies the issues of governance and culture that seems to have escaped them for so long.' - Graeme Samuel, Professorial Fellow in the Monash Business School and former chairman of the ACCC'(Adele] recounts a colourful cast of bullies, thieves and crooks being rewarded extraordinary sums to rip off customers.' - Money Magazine

Selle toote kohta pole veel ühtegi küsimust.
Küsi küsimus
Дианетика: современная наука о разуме, Trigger Point Therapy Workbook: Your Self-Treatment Guide for Pain Relief 3rd, Slug: The Sunday Times Bestseller, Power Of Your Subconscious Mind (revised): One Of The Most Powerful Self-help Guides Ever Written! Reissue, Bump to Birthday, Pregnancy & First Year Journal, Morning Affirmations: 200 Phrases for an Intentional and Openhearted Start to Your Day, Dreamtimes and Thoughtforms: Cosmogenesis from the Big Bang to Octopus and Crow Intelligence to UFOs, Ready For Anything: 52 productivity principles for work and life Digital original, Leases Can Seriously Damage Your Wealth: Leases of Flats in England and Wales, Transcending the Levels of Consciousness: The Stairway to Enlightenment, This Is Your Destiny: Using Astrology to Manifest Your Best Life, How Modern Media Destroys Our Minds: calming the chaos, Know Your Worth: How to build your self-esteem, grow in confidence and worry less about what people think, How to Raise an Intuitive Eater: Raising the next generation with food and body confidence, Aromatherapy: Essential Oils and the Power of Scent for Healing, Relaxation, and Vitality
Nurturing Boys: 200 Ways to Raise a Boy's Emotional Intelligence from Boyhood to Manhood (Communication, Emotions & Feelings), Born to Read: Our First Five Years in Books, Multi-Hyphen Method: The Sunday Times business bestseller, Work Optional: Retire Early the Non-Penny-Pinching Way, You Look So Much Better in Person: True Stories of Absurdity and Success, Love Your Bones: The Essential Guide to Ending Osteoporosis and Building a Healthy Skeleton, Mediterranean Zone: For a Longer, Leaner, Healthier Life, You Only Live Once: Find Your Purpose. Reclaim Your Power. Make Life Count. THE SUNDAY TIMES PAPERBACK NON-FICTION BESTSELLER, Baby Sleep Solution: The stay-and-support method to help your baby sleep through the night, Animals as Gods: Shapeshifting through Animistic and Totemistic Witchcraft, Runes Rebooted, Wheel of the Year With Animals as Guides, Tarot of the Bohemians: Absolute Key to Occult Science Revised Edition, with a Preface by A.E. Waite ed., Near-Death Experience: In the Light of Scientific Research and Rudolf Steiner's Spiritual Science 2nd ed., High-Intensity Interval Training for Women: Burn More Fat in Less Time with HIIT Workouts You Can Do Anywhere
Becoming Supernatural, 21 Lessons for the 21st Century, Surrounded by Idiots : The Four Types of Human Behaviour
Garanteerime parima hinna